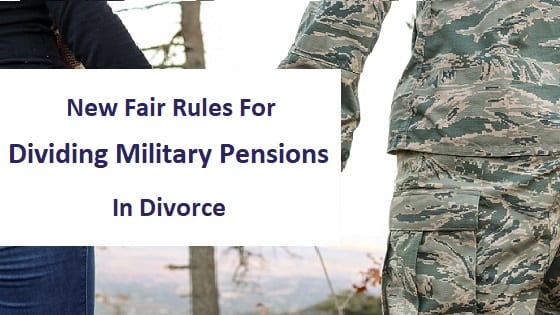 In any divorce, assets and property division is a sore subject that can provoke tension between ex-partners. It’s even more sensitive in military divorces when coming to dividing military pensions. Rarely such couples can come to an amicable agreement.

Many people believe that to be awarded pension benefits, the spouse must be married to the servicemember or retired veteran for 10 years. This is a common misconception. Even if you’ve spent together less than a year in marital relationship, a state court can provide a share of the military pension to the ex-spouse. Throughout the country, military pensions are considered to be marital or community property. The Uniform Services Former Spouses Protection Act is the overarching federal statute that routes the states to treat army pension plans as property as opposed to revenue and governs the terms and conditions for splitting retired life pay in divorce. Until 2017, the state courts were permitted under the Act to divide the pension 50-50, based on its worth at the retirement of the servicemember. This approach imposed an excessive burden on servicemembers and other military professionals since the courts based the amount your spouse will receive, not on a current rank, but on the rank you will be at retirement. For example, even if you divorced twenty years ago at rank O-3 and after that got to the rank O-5, your ex-spouse would now have 50% of the retirement benefits you earned as an O-5 with 20 years of service. Even if you remarry and remain with the second spouse for the following thirty years, the first one still obtained fifty percent of your full military pension plan.

In 2017, new rules for calculation were introduced. Now the pension division in divorce is based upon the servicemember’s rank and also time in service at the day of the divorce, plus any kind of expense of living modification. Making use of the previous example, the new policy would allow the spouse to be awarded 50% of the pension plan for an O-3 with ten of service. It can not be based on the complete worth of your retirement as an O-5 at 20 years. However, it applies only to those separation processes becoming final after the Act was passed.

Payment Rules and Other Spousal Benefits

The agency that regulates paying military retirement benefits called The Defense Finance and Accounting Service has strict rules for making direct payment to former spouses. Unless the divorced pair was married during at the very least for ten years of the member’s service time, the DFAS will certainly not directly pay retired life benefits to the partner. It means that s/he will need to find an avenue to collect the share through state court. The length of marriage is based on state legislation as well as calculated from the date of the marital relationship to the day the court goes into an order splitting marital property.

In addition to a share of the servicemember’s pension plan, the previous spouse may be qualified to obtain particular army benefits as long as the partner meet required criteria. These benefits are statutory as well as are not subject to arrangement in the separation. If the previous spouse was married to the servicemember for at the very least 20 years of his or her armed forces service prior to the separation, the partner has the right for lifetime military benefits including commissary, medical benefits, and military exchanges. In cases when the overlap between the marriage and the member’s military service is less than 20 but at least 15 years, the ex-spouse is qualified for one year of medical benefits only. Such benefits are available only if the former spouse is not covered by an employer health plan, and those benefits end upon remarriage.

Are you going through a military divorce? Clagett & Barnett understand the complexities of divorce among military families. We have more than 30 years of experience in law and we have worked on hundreds of cases. Every case is very important.

Schedule a free consultation to find out more about your very own situation – just call us.