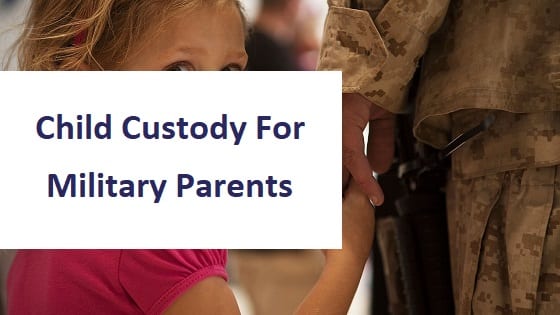 Courts establish child custody plans based upon the best interest of the child. Under this program, courts decide custody issues based upon what would serve the child’s general well being, and for that many aspects are considered. However, particular aspects come into play when a military spouse goes to family court with unsettled child custody.

Child Custody When One or Both Parents Serve in the Military

Military service, by one or both parents, can bring tough child custody concerns. Around 142,000 participants of the Armed Forces (active, Guard, as well as Reserve) are single custodians of minor youngsters. Moreover, a lot of service members have re-married and now live in a family of one biological parent and his or her new spouse, that is a stepparent. The most complicated of all the scenarios, probably, are those in which a single service member has physical custody of a child without having obtained an order of custody from any kind of court. When any one of these custodial-service member parents deploy, attend military training, or attend a service-mandated school, the concern emerges: “Who cares for the children while I’m gone?” A person needs to answer that question, and commonly, it is a state court family law judge.

Military parents, that might need to serve abroad, risk losing child custody when deployed, so it’s always better to look for a military divorce lawyer consultation.

At Clagett & Barnett, you will get the answers to the key questions that include whether:

Based on the child’s benefits and interests, courts may find that it’s best for the temporarily custody situation to become permanent. Unfortunately, military parents are in some sense, punished for their service since their duties commonly make it hard to win a custody battle.

Child custody can end up being a lot more complex when the parents are separated and one uses a military deployment as a chance to reclaim a child. Moreover, even when the parents are not fighting, custody can be a lot more difficult relying on whether the mother or the father is the military parent. For instance, if a military parent leaves a child with a stepparent or a family member during deployment, the other parent may apply for custody of the child. Commonly, short-term custody is sought, then permanent custody.

The Servicemembers Civil Relief Act (SCRA) is a federal law that permits military personnel to stay civil procedures throughout military service. A stay is a temporary suspension of a legal action. Nevertheless, several courts do not use SCRA when it involves child custody. Juries believe that the best interests of the child exceed any type of federal legal protections to military parents.

More than 20 states have military custody protection. These states have actually passed regulations that safeguard parents while they’re deployed. In these states, legislations offer that permanent custody modifications can not be made due to a parent’s military service and allow military parents gain back custody after they return. Any type of temporary custody modifications made because of deployment revert to the original setup when the parent returns from duty.

In addition, relocation based on military service can make it difficult to identify what court has jurisdiction or authority in a custody case. If a military has actually lived abroad for some time, it’s possible that a foreign nation’s court make a decision.

If a military parent wrongfully takes a child, the other parent might have issues imposing custody legal rights. The military does have guidelines requiring service members to comply with court custody orders. All military services maintain locator services that have the location information of military personnel.

Military divorce and family issues quite differ from the civil ones. That’s why, hiring a professional military divorce lawyer is a must. Get in touch with Clagett & Barnett to guide you through this difficult period of your time and protect the rights you have by the law.